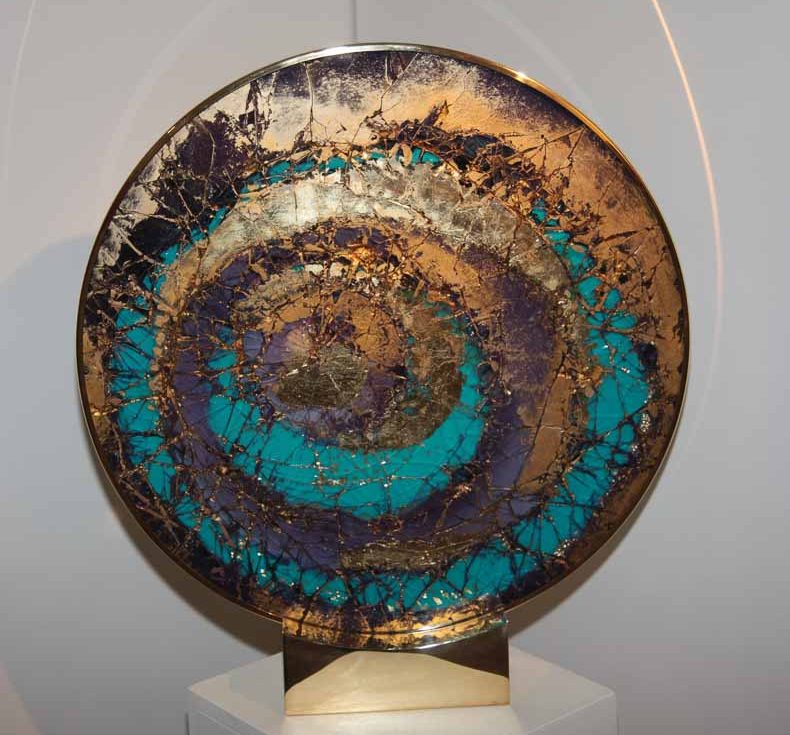 The new solo show ‘Windows to Wherever’ that opened in Æon Gallery, Hampstead on Wednesday has been well received. The show exhibits 20 selected works from various series of works created by Yorgos.

On entering the gallery the visitor is immediately awestruck by the radiant beauty of ‘Eye of Sobriety’ which is looked after as it were by ‘Amitabha’, the celestial Buddha of Immeasurable Life and Light. In the ambience of the basement room the ‘Eyes of Awareness’, an installation of 5 pendants that show variations on the evil eye, are juxtaposed with the mysterious depths of the ocean with the ‘OWD Triptych’.

These artworks are not just windows because they are made of glass. They are invitations to look into things. Nature for example is shown in works like ‘Mimosa’ or ‘Ragged Robin’. The landscape feature on the wall is inspired by the walls of Worcester cathedral and invites you to look into ‘Layers of History’. ‘Innocence II’ and ‘In Memoriam’ are windows on the work of other artists.

In addition to existing work the show also features new work. In ‘Eye of Tranquility’ the artist uses the calming hue of the turquoise to contrast the swirling impatience of our materialistic world.  The ‘Eyes of Knowledge’ resemble a macro vision of a biological cell, the nucleus of which contains genetic information and thus the ultimate source of knowledge.