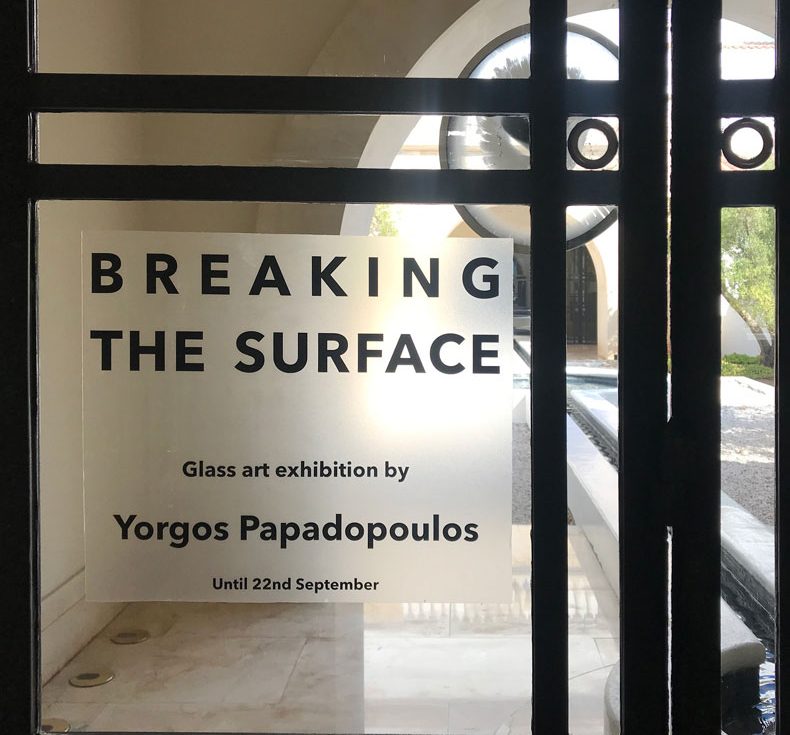 A new exhibition opening at Anassa Hotel on 16 August 2019. Under the title “Breaking the Surface”, Yorgos will showcase new works that exhibit literally broken surfaces along with works that signify his re-surfacing on the Cypriot art scene.

After two decades working from his home in North London, Papadopoulos has returned to his native country.  He set up a larger studio.  There he can explore new materials and scales.

Three kinds of work feature in the show. Firstly, the ‘New Icons’ series addresses the Orthodox icon through his innovative technique. Using breakage (and its randomness and uncontrollability) he tells the story of modernity’s confrontation with tradition.

Secondly, the ‘Stratified Jewels’ series reimagines the ‘matopetra’, the circular blue and white amulets thought to ward off the power of the evil eye. Yorgos has reinvented them as conveyors of good. Most of these works are realised in unbroken, fluid forms. However, they break through the surface of their symbolism.

Lastly, the remaining works in the exhibition explore the theme of ‘Nostos’—homecoming by sea.  Under this theme Yorgos will be showing works from the Radiant Dusk series. These works are inspired by the ever changing sunsets of western Pafos. Similar to their natural examples, the Radiant Dusk works invariably stun the viewer when they are lit with blacklight. These works are made using fluorescent pigments. They render an entirely different visual experience than daylight ever can.

During this exhibition Yorgos will be regularly visiting the hotel. Let us know if you want to meet up.

The show continues through 22 September.