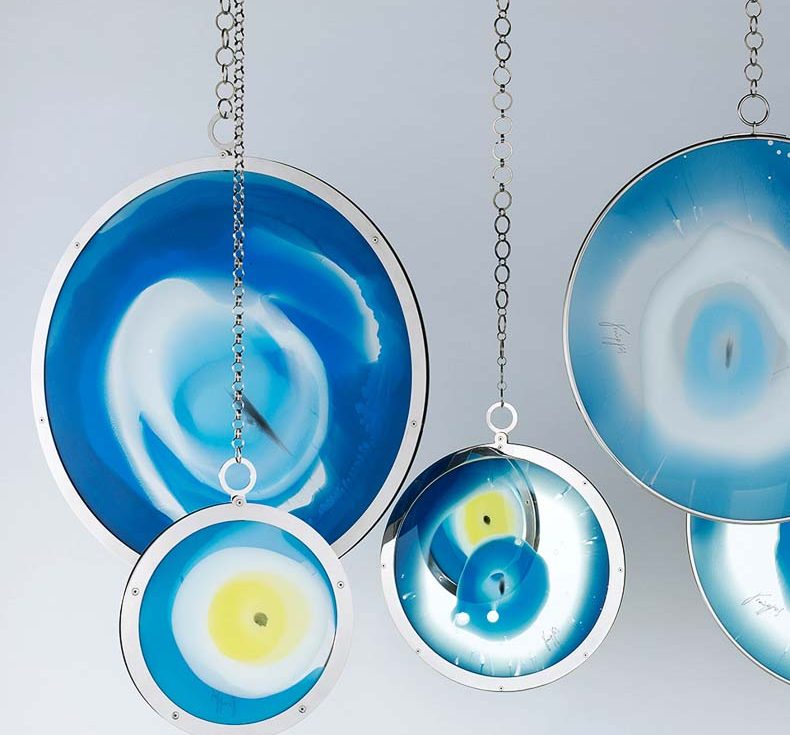 The eye-catching Eyes of Awareness are featured in a group exhibition currently running at the Cyprus High Commission in London organised to mark the Cyprus National Day. If you haven’t had the chance to see them, no need to despair: the exhibition has been extended until the end of this month. Admission is free during normal business hours (Monday – Friday: 09:00 – 16:30) at 13 Saint James’s Square, London SW1Y 4LB

The exhibition’s grand opening was addressed by Andri Anastasiades, the spouse of the president of the Republic of Cyprus and extensively covered by the CYBC (Cyprus national broadcaster).

The dichotomy of the cultures of his youth and the disruptive effects of their clashing has had a significant influence on all of Yorgos’s works. “Something is broken here,” says Yorgos, “but it is mended. It is made to look beautiful. That is what I do.”

Originally inspired by the Middle Eastern belief in the ματόπετρα (commonly called the evil eye), the Stratified Jewels series are unique glass artworks in which pigmented resins are the pool for several materials, such as gold leaf, broken glass and metallic powders. In the Eyes of Awareness, an installation of 5 pendants, the artist develops away from awareness of evil. The original traditional amulet is most closely portrayed in the smallest piece. Put together they resemble a planetary system, representing a more cosmic awareness. And through the use of mirrored glass we are moved into the realm of self awareness.

A clash of cultures is also present in the New Icon series. They represent the collision and reconciliation of two visual traditions, of novelty in Western culture with the rigidity of Greek Orthodox iconography. The idea to treat the icons as windows between the human and divine worlds came during a retreat to Mount Athos. Glass is both transparent and capable of bearing an image, a revelation and a mystery. The “Twelve Madonnas” were first exhibited at the Famagusta gate, Nicosia in 2008, a location echoing the theme of displacement that is found in many of the works.

The Panagia Eleftherotria (Mary the Liberator) has a special place in the artist’s heart. In many ways she reveals a personal liberation of the cultural clashes. “The Virgin is both the Mother of God and a woman. She is eternal, but also mortal; unchanging, but capable of change.” These two sides of the Maddona can be admired in both sides of the Panagia Glykophilousa (Mary of the Sweet Kiss). The icons of Saint George, the artist’s name patron, deviate from their traditional models by their unorthodox dimensions.

The inspiration of forms produced in nature can be found in the Open Water Diving series, a body of work that came about after diving in the Great Barrier Reef. The unspoiled natural beauty of the deep sea, with its darkness and contrasting radiance of colourful and even luminescent underwater creatures is portrayed in the OWD Triptych.

Lastly, In Memoriam shows how artists inspired each other. When admiring the works of the textile artist Heather Hunter, who sadly passed away in June 2013, Yorgos was captivated by the stitches and their repetition, which he then hammered into an emotional dedication.