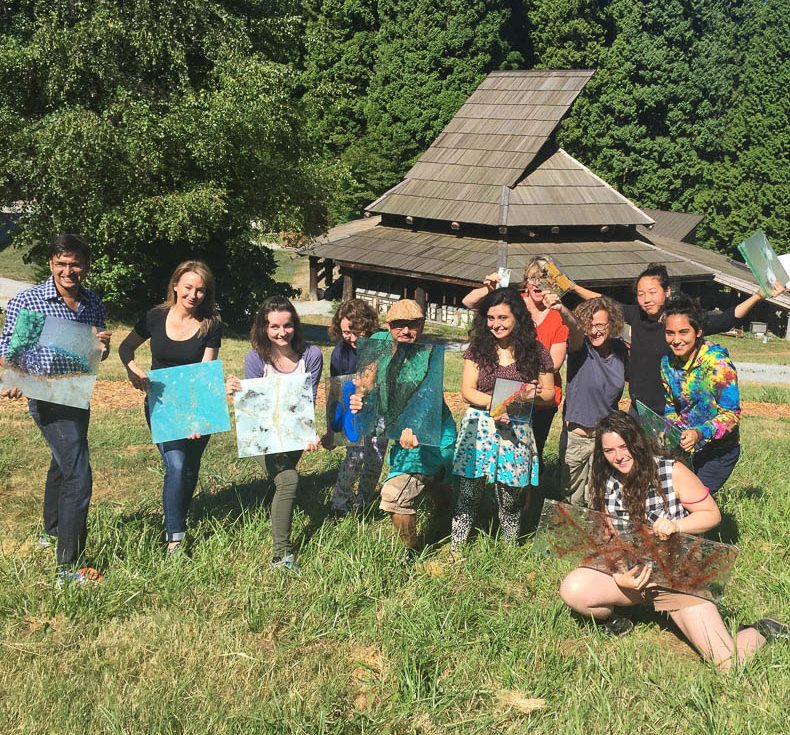 When one thinks of Pilchuck one cannot but think of the centre of the glass universe. And rightfully so! At Pilchuck there is glass galore. It is glass heaven! With an abundance of energy the school attracts the cream of the emerging and established glass artists of the world to teach the enthusiasts of all ages a series of summer courses, with only one common denominator: glass!
Being invited to join this vibrant community and to be able to give a course on what is thus far a unique technique was an enormous thrill for Yorgos Papadopoulos. It shows both the daring and innovation minded philosophy of the school as well as a highly appreciated artistic recognition for the artist.

The fact that Yorgos Papadopoulos’s works are unique is certainly not a result of the artist being secretive about his techniques. When artistic director Tina Aufiero in her welcome address expressed her view that Pilchuck is all about sharing knowledge, Yorgos couldn’t agree more. Back in 2004, when he was commissioned by A & C Black (currently Bloomsbury Publishing) to write about his technique, he never hesitated to reveal his ‘secrets of the trade’. Imagine if the first painter would have patented the use of brushes, paint and canvas… How poor would art have been because of it?

The same openness Yorgos applied when teaching at Pilchuck. Not being an experienced teacher, it proved quite a challenge to put together the course for an artist who is so used to working in the solitude of his studio. Moreover, his art basically being process-led, it was hard for him to plan the course. His art is to a certain extent the result of where the process leads him.

As title of the course he chose ‘Breaking and Mending’. These two concepts are not just the essential elements of his technique, they also point to the core of his artistic vision. Unlike most glass artists, for Yorgos breakage is not death nor destruction. It is just another part of the indefinite impermanence of being that, with the right attitude and effort, can be turned into something beautiful.

Without the experience and struggling with the Socratic paradox of knowing to know nothing, the task of teaching seemed daunting. The students that signed up for his class came from all corners of the world, with various backgrounds and aged between 21 and 65. And to make matters even more complicated, Yorgos was asked to work with local products. Where he normally laminates with a two component silicone gel produced by Wacker Chemie in Germany, the works at Pilchuck were to be laminated with a similar product of Silicones, Inc., a company based in North Carolina. As it turned out, teaching at Pilchuck proved to be no different than his standard practice: highly experimental.

Remember those first days? The start of a new year. Meeting your new teachers. New kids in class as well as recognising some returning faces. An exciting yet somewhat scary experience for many. An experience not totally dissimilar from what the teachers experience on those days.

For Yorgos setting up class in the studio building alongside Helen Lee from the University of Wisconsin-Madison, and Fred Metz, the 3D printing mastermind behind Spiral Arts Inc. reminded of those first days. But very soon the atmosphere was very friendly, and with Helen’s baby around even homely. But at times there was doubt: Yorgos wasn’t sure if the constant hammering and smashing of glass would not drive the others crazy.

The experience was intense. Managing eight students… Demonstrating the ‘standard way of working’ and then letting them ‘crack on’ so to speak with their own imagination and courage as their most important tools. Guiding them where needed and letting them make their own mistakes when they insisted. In between studio sessions there were the wonderfully well prepared meals and the evenings for winding down with a walk in the woods, a chat on the deck with views of the sun setting over the Puget Sound or a glass of wine with friends.

Because of the intensity of it all, the School encourages everyone to take some time off on Sundays. This 28th of June happened to be Seattle Pride. And with just two days after the Supreme Court had ruled that States are not entitled to ban same sex marriages there was a lot to celebrate that day. The winding down and then returning to the studio with the pressures of running out of time made the work all the more intense.

Straight into the Glory Hole

One of the most exciting moments was the slot Pilchuck gives its instructors to work with some of the best gaffers in the world in the hot shop. In Yorgos’s normal practice he exclusively works with cold glass. No blowing, no fusing, no lamp work. It had been since his days at the Royal College of Art that he had actually worked in the hot shop himself. During the 2013 participation in the AA2A programme at the National Glass Centre of the University of Sunderland, his interest in working with hot glass were reinvigorated. But working with the unrivalled Dante Marioni and Michael (Mikey) Cozza blew him away.

After having watched them work with artist in residence Camille Utterback and figured out the artistic and technical language of the hot shop, he got several hours of intensive collaboration with the two men. In line with the inspiration of natural forms, they created following Yorgos’s design, a black anemone, a sponge like creature in clear glass and a non functional vessel in resembling some elegant mollusk in deep waters. The work and the chemistry between the gaffers was at times theatrical. Nothing seemed to be too challenging except the impossible (like the suggestion to put fibre paper between blown canes to create space). Working with hot glass is definitely on Yorgos’s agenda and he’s hoping to get a residency at Pilchuck or Northlands to get the ideas rolling.

On Tuesday Seattle based glass artist Cappy Thompson joined Yorgos’s class. Best known for her glass painting ‘I Was Dreaming of Spirit Animals’ at Seattle’s international airport, her narrative imagery was a perfect example of how Yorgos’s unique technique can be used in an endless number of different ways. Together the artists created two panels, ‘Sphinx’ and ‘Ichthus’, which are currently on show at Frederick Holmes & Company gallery in Seattle. The show is on until 2nd August 2015.

By Wednesday all students had finished their personal work and the studios were cleaned up for a walk through. The results were very impressive. The students were justly very proud of their achievements. A special thank you needs to go to both teaching assistants Sonja London-Hall and Cate Watkinson, who brought valuable teaching experience to the course and order to the class.

After leaving Pilchuck there was some time to wind down in the beautiful Pacific Northwest. Hiking to Rattlesnake Ledge, enjoying the impressive majesty of Mount Rainier on a clear summer’s day, exploring the undergrounds of Seattle’s sidewalks. All fun experiences. But none as compelling to a glass artist as a visit to the Chihuly Museum and Garden and a tour of the the Chihuly Warehouse Studio by Paula Stokes. The latter was arranged by Sean O’Neill a gaffer and glass artist himself with whom Yorgos did another quick and spontaneous collaboration of filling up glass vessels with broken bits and silicones. A visit to Sean’s studio also introduced him to the beautiful work of his wife Armelle.

For a photographic overview of the Pilchuck experience, please visit our Facebook album.